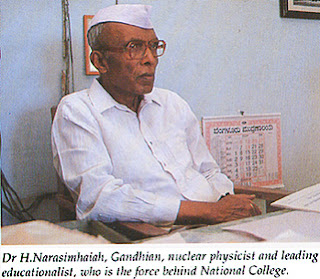 Born in Hossur on 6th June 1921 (೬ನೆ ಜೂನ್ ೧೯೨೧ ) , a village near Gauribidanur in Karnataka, India. His parents were poor, illiterate and belonged to a disadvantaged caste. Upon completion of elementary education, he left for Bangalore where he joined the National High School, Basavanagudi, in 1935. He received his B.Sc.(Honors) and Master's degree in Physics with first class from Central College of Bangalore (1946). The same year Narasimhaiah started his academic career as a lecturer in National College, Bangalore.


" I got an opportunity to see him & take an autograph around 6-7 years ago. I saw him in Bangalore.Ravindra kalakshetra ". (ರವಿಂದ್ರ ಕಲಾಕ್ಷೇತ್ರ ) . 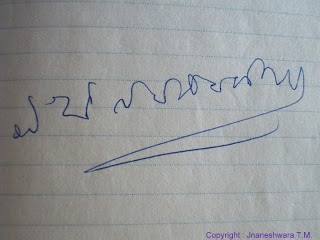 He stayed in a hostel with mat & couple of old trunks although he was in big post. He was unmarried.When some body asked abouth this ,he said with humor : Oh I forgot to get marry..

Narasimhaiah had interactions with Mahatma Gandhi and translated Mahatma Gandhi’s Hindi speech into Kannada, when the latter visited the National High School.

During his tenure as Vice-Chancellor, he constituted and chaired The Committee to Investigate Miracles and Other Verifiable Superstitions, to scientifically investigate claims of miracles and paranormal phenomena. The committee challenged the claims of Sathya Sai Baba, one of the most prominent godmen of India, who said that he could materialize holy ash and gold chain from nothing. A public controversy ensued, causing some of the godman's followers to desert him.


As the Vice-Chancellor of the Bangalore University from 1973–77 (೧೯೭೩-೭೭) , he introduced psychology, social work, drama, music and dance as subjects. He went on to serve the State Legislative Assembly; and in 1984 (೧೯೮೪) , received the Padma Bhushan from the Indian Government. At the time of his death on January 31, 2005 * (ಜನವರಿ ೩೧ ೨೦೦೫)   , Dr. Narasimhaiah was the President of the National Education Society.
Posted by Jnaneshwara at 10:56 AM